Ritual. The very word, in English, at least, suggests something that is done the same way with regularity. Your morning coffee, for example. Or shaharit, the morning service.

Some of us in the Jewish world are satisfied with the idea that this is the way we have always done it, and it always will be done this way. That there is no need to change anything.

But not everybody is satisfied. Not everybody agrees with the idea that Jewish ritual should not change. In fact, what makes us the Conservative movement is that, at least historically, we have maintained the vast majority of our tradition while allowing for some conservative, i.e. minimal and gradual change. And, of course, ritual has always changed. What we do today as Jews looks quite different from what our ancestors were doing in Jerusalem in the Second Temple period, or in 9th-century Baghdad, or 12th-century Spain, or 16th-century Tzfat, and so forth.

You may not believe this, but there really is no Hebrew word for ritual, at least the way we use it in English. Yes, if you ask an Israeli, s/he will tell you that the word is minhag, custom, or perhaps pulhan (or even a Hebraized version of the English, ריטואל, ritu’al). But this is actually a borrowed word from Aramaic, from the Talmud and ancient targumim (Aramaic translations of the Tanakh / Hebrew Bible), using a shoresh / root not found in Hebrew; the word is effectively a synonym for the Hebrew avodah, in its ancient meaning of service to God.

But the concept of ritual, which in our language unites the sacred and the mundane, does not exist in Hebrew.

What is the source of meaning in ritual? Is it the safety or comfort of doing something the same way every time? Is it knowing that my ancestors have done it this way for a long time? Is it that the performance of the ritual itself is meaningful? Is it, as may often be the case with a Pesah seder (the evening discussion and festive meal held on the first two nights of Passover), that it is the ancillary stuff that is most meaningful: the gathering of family, the comedic uncle who takes a sip from Eliyahu’s cup when nobody is looking, the time that so-and-so was clearly drunk from four cups of Manischewitz, etc.

Let me propose something: we make our rituals meaningful. We frame our lives in holiness. Do you want to be moved? Then reach higher in seeking and making meaning.

Yes, I know that’s not easy.

My father has told me that when he was a child, his grandfather (alav hashalom / may peace be upon him) would lead the family seder. He would sit at the head of the table, mumble through the haggadah (the book used as a guide for conducting the seder), and pause here and there to instruct everybody to do something: dip the karpas / green vegetable; spill ten drops of wine; eat some maror / bitter herbs, etc. Nobody had any idea what was going on, and then they ate.

Was that meaningful? Maybe in some ways – it still satisfied what you might call the implicit meaning of the seder: a family gathering, a traditional meal marked with ritual, the seder symbols on display, reminding us of our past and the meaning of freedom. But perhaps the explicit meaning – the text and the questions and the discussion and the soul-searching – was absent.

But for many of us today, the implicit is not enough.

A moment of gentle, internal criticism: I mentioned two weeks ago that the Federation’s 2017 Community Study said that only 22% of self-identified Conservative Jews have found their “spiritual needs met, very much.” That number is, in my mind, embarrassingly low. Much lower than Orthodoxy, and even lower than Reform. Why is that, ladies and gentlemen? Is it that your rabbi is uninspiring? Is it that your synagogue is not spiritually-inclined? Is it our rituals?

Well, if that’s the case, let’s change it! Let’s find the meaning together. Help me out.

How do we make it meaningful? In my mind, the best way to make it meaningful is to talk about it. We do an awful lot of “davening” here at Beth Shalom – and I use the Yiddish/English term deliberately, because I am not confident that what we do is really tefillah, in the spiritual sense of the word. (Tefillah / lehitpallel means “self-judgment.”)

You see, true tefillah requires understanding. It requires stepping away from your tough exterior to expose the mushy stuff underneath. It requires that the words that you say have something underneath them – that they are being spoken from the heart (Pirqei Avot 2:18):

Rabbi Shim’on says: Be careful when you say the Shema and Amidah, and when you pray, do not make your prayer rote recitation, but rather pleas for mercy before God, as it says (Joel 2:13), “For God is gracious and merciful, patient and abounding in love, taking pity on evildoers.”

An awful lot of words of tefillah go by at this synagogue (and many others), and I just can’t believe that they are all saturated with pleas for mercy before God. Much of it is merely mumbling. Granted, that mumbling is part of the tradition. (One of my cantorial school professors at the Jewish Theological Seminary, Dr. Boaz Tarsi, had an academic jargon term for the buzz of synagogue prayer: “heterophonic chant mumbling.”) But it seems to me a whole lot more like qeva (rote recitation) than kavvanah (intention).

So here is the good news: the seder is actually a low-hanging fruit with respect to finding meaning in Jewish practice. Why? Because (א) there are lots of great haggadot out there that have good translations and commentary for a whole range of interests and levels; (ב) because it’s not shul / synagogue, and you can take your time and your creativity to personalize and discuss your seder. Most of us spend far more time on the food preparation than we do on the discussion part. But the Maggid section (in which we tell the story) is often left unloved – hurried through without dwelling on what it all means. What does it mean to be free? Where are the slaves in this world, and what are our obligations to them? What are the questions that the story of the Exodus raises for us today? How does our contemporary relationship with the Torah fit in? 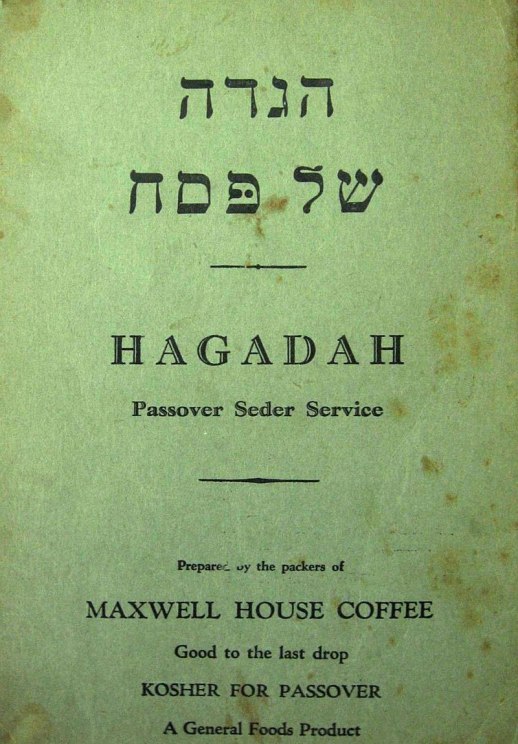 In fact, we find in multiple places in the traditional haggadah what seem to be direct commands to make the seder meaningful. One such place is the following (a direct quote from Mishnah Pesahim 10:5):

In every generation one must see oneself as having come forth from Egypt, as it is written (Exodus 13:8): “You shall explain to your child on that day, ‘It is because of what God did for me when I went free from Egypt.’”

Each year at the seder, and arguably every day of our lives, our tradition requires us to see ourselves as having personally gone from slavery to freedom. For many of us who remember the events of the 20th century, that meant recalling the Sho’ah / Holocaust and the establishment of the State of Israel, and the intimate connection between these two events. Or those of our people who left the Soviet Union. Or those who left Iran in the context of the Iranian Revolution.

What sort of meaning will our children and grandchildren derive from these rituals? What is the meaning that we are making today? Will it be triumph over rising anti-Semitism? Will it be an end to the scourges of drugs, mass shootings, and demagoguery? Will it be a solution to rising tides, melting polar ice caps, and flooded cities?

I hope that most of us will be attending a second seder tonight. If you did a straightforward, “let’s just hurry through this and get to dinner” seder last night, maybe tonight is the night to go deep. Take your time. Have some more karpas if you’re hungry, and spend some more time talking. That’s the ritual we need. Make it meaningful.