As part of an ongoing, informal series, I am speaking occasionally on the fundamentals of Jewish life. While many of us are well-versed in the fundamentals, and far above that, I think it is important to refresh our memories from time to time about the things we think are the most essential. So you might forgive me if the following sounds preachy, but hey, I’m a preacher!

So far in the series, we have covered Shabbat and essential go-to (refrigerator-magnet) texts. Today we are going to cover what is, if we’re being honest here, perhaps one of the more ridiculous and perhaps misunderstood mitzvot of Jewish life: the mitzvah of tefillin. 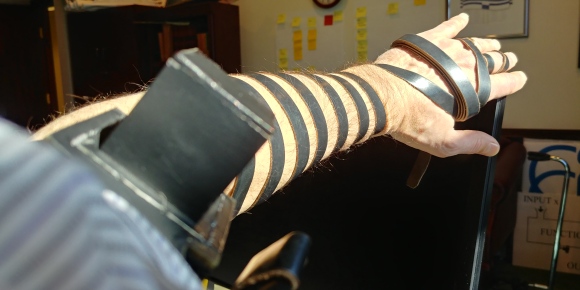 Now of course this is extraordinarily timely, because, well, it is our obligation to put on tefillin six mornings a week. So, for example, tomorrow. And not only that, but it so happens that Sunday, February 3 was the Federation of Jewish Men’s Clubs World Wide Wrap, which we celebrated during JJEP at Rodef Shalom with the teaching and application of tefillin. 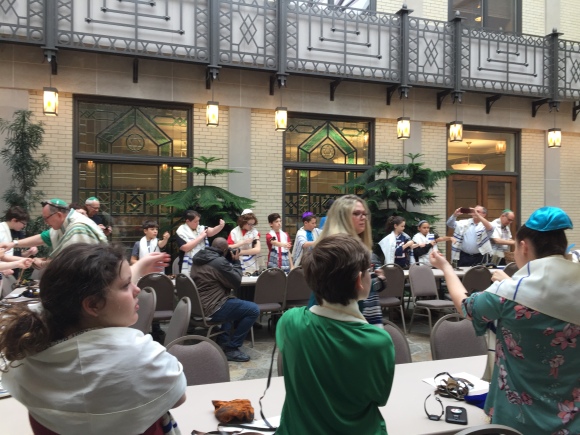 So first some hard truths: putting on tefillin is a little strange, and somewhat alien to those who have never done it.

And yet, I believe that this mitzvah is truly essential. In fact, I think it might be up there with some of the most important physical mitzvot: building a sukkah; removing all the hametz from your home before Pesah, for example.

Those mitzvot that require a certain amount of physical work, of doing something that requires more bodily investment than the recitation of prayers or eating certain foods, are, in my mind, the ones that bring it all home in Jewish life. You have to go out of your way to do these mitzvot. It’s kind of like dipping your toe in the water versus immersing your whole body. Putting on a tallit is easy. Refraining from eating shrimp is pretty easy. Even many Shabbat observances can be easy. But tefillin is hard. It requires familiarity with an arcane ritual and obscure scriptural readings and then there’s that whole binding-in-leather-straps thing, which for many seems a wee bit uncomfortable. Plus, I know this a deal-breaker for many: it messes up your hair.

As you may know, I am at morning services here at Beth Shalom every day except Wednesday. Most of the men who join our services put on tefillin, and also two women who join us regularly. Often, there are people who are attending services who are not “regulars” – generally people who are observing yahrtzeit (annual remembrance date of a loved one’s death). I offer tefillin to men, and to women if they are already wearing a tallit, thus signaling that they have taken on at least some of the mitzvot traditionally ascribed to men.

Nine times out of ten, that person politely declines the tefillin, and I don’t push.

Dr. Jonathan Sarna, in his magnificent history entitled American Judaism, documents how during the period of heavy immigration from Eastern Europe in the early 20th century, there were reports of men who burned their tefillin on the boat. They knew that America was a free country, where they would no longer be bound by the archaic folkways of the shtetl. The release from the ancient leather straps suggested a kind of release from ol malkhut shamayim, the yoke of the kingdom of heaven, i.e. the mitzvot.

We’re free here to put on tefillin, or not. And most of us do not. But that is nothing new; the medieval rabbinic commentator Rabbi Shelomoh ibn Aderet, aka “the Rashba,” went on a “tefillin tour” of France and Spain in the 13th century to promote the mitzvah.

Marshall Sklare, the Brandeis sociologist who chronicled American Jewry in the middle of the 20th century, suggested that American Jews are most likely to maintain Jewish rituals that:

Mostly we think of Sklare when we think of holidays: Pesah and Hanukkah are still widely practiced; Shavuot and Tish’ah Be’Av less so.

And the mitzvah of tefillin does not make the list, because it’s every day and not child-centered. And it messes up your hair.

But tefillin scores high, I think, on the ability to redefine for today.

What meaning can we derive from tefillin? How can this curious ritual, become meaningful enough that it can become fashionable again?

So, before I answer that, I have to first give you the basics of tefillin.

And I would love to stand before you and say, “There is magic here! These boxes are special communication devices which connect us directly to God! They are amulets that ward off evil spirits! They keep you healthy!” But I can’t do that.

(They might actually protect you in the event of a heart attack through remote ischemic preconditioning, but although there was one such medical study that indicated this, I am sure that there will soon be another one that will contradict it.) 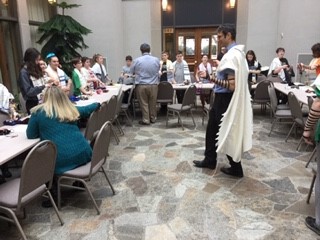 Really, there is no magic here; only one of the most powerful, physical symbols that we have as Jews. We so understand the richness and value of our textual heritage that we display them proudly on our arms and our foreheads every day.

This is the sign of our love for our tradition, and a sign of God’s love for us.

What do we say when we wrap the strap around our middle finger? Hosea 2:21-22:

I will betroth you to Me forever;

I will betroth you to Me in righteousness and justice, in loving-kindness and mercy;

I will betroth you to Me in faith, and you shall know God.

And not only do they declare our betrothal to God, but they also suggest that, every morning, we connect our arms with our heads and hearts, as a reminder that the works of my hands should reflect my ongoing struggle to ensure that my deeds are in line with my intellect and the good intentions of my soul. This binding is, you might say, a kind of suggestive intent for our actions for the rest of the day, a pre-emptive reminder of the mitzvot, of making the right choices in our interpersonal relationships.

But in case that is not enough, here is something else that might help rekindle our interest in tefillin:

In 2014, the Rabbinical Assembly’s Committee on Jewish Law and Standards (CJLS) passed a teshuvah (halakhic responsum, that is, a rabbinic opinion that answers a particular question in Jewish law), written by Rabbi Pamela Barmash, that concluded that women may be considered obligated to all mitzvot. Her conclusion, approved by the committee and therefore a halakhic option available to Conservative communities, is as follows:

The historical circumstances in which women were exempted from time-bound positive mitzvot are no longer operative, and the Conservative movement has for almost a century moved toward greater and greater inclusion of women in mitzvot. In Jewish thought and practice, the highest rank and esteem is for those who are required to fulfill mitzvot. We rule therefore that women and men are equally obligated to observe the mitzvot. We call upon Conservative synagogues, schools, and camps to educate men and women in equal observance of mitzvot and to expect and require their equal observance of mitzvot.

So here’s the kicker: in an ultimate statement of redefinition, we are all obligated to the wearing of tefillin. One of the most traditionally masculine mitzvot can be understood as applying to all of us. And we all should strive to take that holy opportunity six mornings a week.

I am ready and available to teach anybody who wants to learn. Come see me!