Shabbat Shirah, the “Shabbat of Song,” is the day on which we chant Shirat HaYam (the Song of the Sea, which the Israelites chanted upon having crossed the Sea of Reeds on dry land, Shemot / Exodus 15:1-21) as well as Shirat Devorah (the song chanted by Devorah the Prophet following victory over the Canaanite commander Sisera, Shofetim / Judges 5:1-31). In honor of Shabbat Shirah 5781, I created this musical explanation of the nusah (prayer-chant melody), musical modes and motifs, and congregational melodies used in the synagogue and in home rituals throughout Jewish life.

Some of you may recall that a few weeks back I spoke about refrigerator-magnet texts – short, pithy statements from our textual tradition that are the most resonant, the most useful in our day-to-day lives, and how we should keep them in front of us at all times. (I’m actually looking into making refrigerator magnets; will keep you posted.)

Dr. Martin Luther King, Jr. had a few go-to verses of his own, pieces of Biblical wisdom that he continued to return to in his sermons and speeches and writings. One with which you may be familiar is from the prophet Amos (5:24):

It’s a verse that appears in our siddur / prayerbook in the Prayer for Peace (Siddur Lev Shalem, p. 178), which we occasionally recite. It also appears in one of the quotes inscribed around the perimeter of the Martin Luther King, Jr. Memorial in Washington, DC:

We are determined here in Montgomery to work and fight until justice runs down like water, and righteousness like a mighty stream.’

Dr. King delivered that verse on Dec. 5, 1955, in Montgomery, Alabama, on the first day of the Montgomery bus boycott, just a few days after Rosa Parks famously refused to surrender her seat in the front of the bus.

One month after the shooting here in Pittsburgh, my family and I went to Washington, DC for Thanksgiving. It was my first visit there with our kids, and although I have been to our nation’s capitol many times, somehow this trip was so much more emotional. Perhaps it was because it was the first time that I was seeing the monuments to our democracy through the eyes of my children; perhaps it was because the communal wounds of October 27th were still bleeding; perhaps it was because of the divided state of our body politic. In any case, when I got to the Martin Luther King Memorial, I found myself tearing up and indeed even sobbing out loud.

Have you been there? Let me describe it: The three-quarter bust of Dr. King is hewn from a piece of stone which looks as though it has been cut out of and moved forward from a larger stone hill. Inscribed on the bust is the line, “Out of a mountain of despair, a stone of hope.” 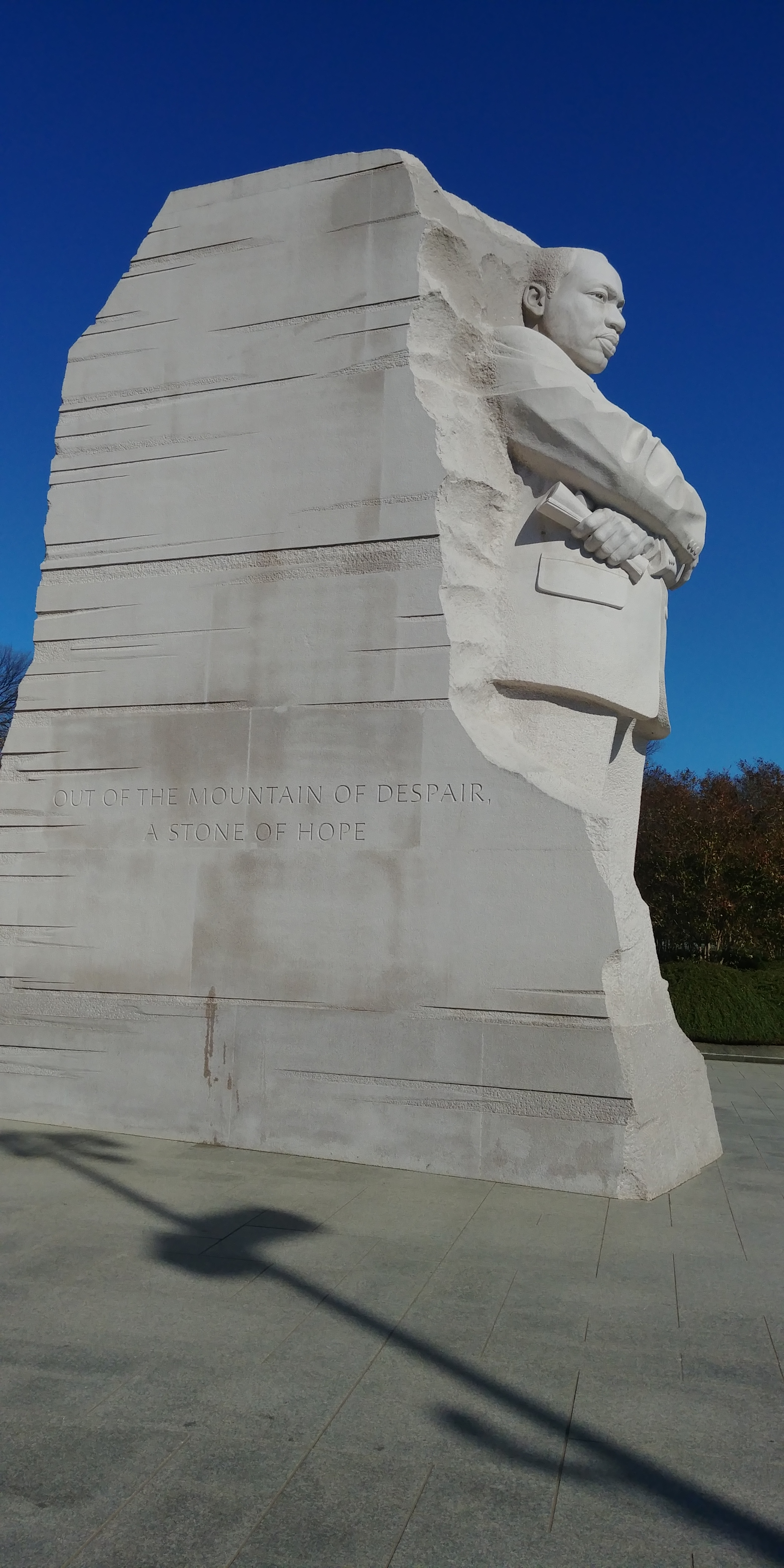 And around the entire plaza are a series of fourteen of the most powerful quotes from Dr. King’s oratorical bounty. With virtually every one of those quotes, I cried even more. Here is just a taste:

Injustice anywhere is a threat to justice everywhere. We are caught in an inescapable network of mutuality, tied in a single garment of destiny. Whatever affects one directly, affects all indirectly.

We must come to see that the end we seek is a society at peace with itself, a society that can live with its conscience.

Dr. King had a special gift that brought people together, that made Jewish kids from New York want to go down South and work on behalf of African-Americans, that made Rabbi Abraham Joshua Heschel want to walk with him in Selma, that made people want to stand together, to march together, to sing together.

When we face the types of social challenges that we are up against right now as a society: the scourge of hatred in all its forms, the struggle for equality for all people, the breakdown of family and neighborhood ties, the curse of opioid addiction, the seemingly endless cases of unarmed black men and boys shot by policemen, it would do us good to remember that the framework of religion, and the interfaith coalitions that this framework often spawns, have helped us in the past to overcome such challenges. Dr. King’s leadership was successful not only because of his knowledge of pithy texts, but also because of his ecumenical sense of, “We’re all in this together.”

And we do indeed all need to be in this together.

And even while our paths to God may vary, the true strength of what unites us is formidable.

Take for example, the following:

Make a career of humanity. Commit yourself to the noble struggle for equal rights. You will make a better person of yourself, a greater nation of your country, and a finer world to live in.

To me this suggests two different mishnayot from Pirqei Avot, the 2nd-century collection of rabbinic wisdom:

All who serve on behalf of the community should do so for heaven’s sake. Their work will prosper because the inherited merit of our ancestors endures forever…

Rabban Shim’on ben Gamliel taught: The world rests on three things – on justice, on peace, and on truth, as it is written (Zechariah 8:16): “With truth, justice, and peace shall you judge in your gates.”

These words drove our ancestors in ancient times to keep our faith alive; they drove some of our parents and grandparents to join forces with Dr. King in the fight for civil rights. They will also always drive Jews to work on behalf of the common good, to seek justice and equality for all.

Dr. King spoke and wrote and marched at a time when churches, synagogues and other faith-based organizations worked as focal points of community organizing.

And in all those houses of worship, we need to double down on the words of our various traditions – the texts that speak of justice and peace, of community and equal rights, of our nation and of God. We can make change by coming together, by emphasizing the principles that we share. We still have the power to act on Dr. King’s vision, that vision in which people of all races and religions and socio-economic statuses can in fact cooperate for the common good.

When we sing together, loudly, as people of faith, our voices will be heard.

Back at the Dr. King memorial, from his Christmas sermon in Atlanta in 1967, I also read the following:

If we are to have peace on earth, our loyalties must become ecumenical rather than sectional. Our loyalties must transcend our race, our tribe, our class, and our nation; and this means we must develop a world perspective.

If we desire to act on the love that we explored over the High Holidays, then we all need to reach out, as a community of faith, to other such communities: to our black and brown and white neighbors, to partner with them to make this world a more just and equal and peaceful place, a place where no child is separated from their parents, where nobody is shot for any reason, where no drug company can work to convince doctors to write out more prescriptions of addictive pain medication, where we as a nation and a world can wrap our brains around the realities of climate change and protect the populations which will soon become the most vulnerable.

On this Shabbat Shirah, this Shabbat of Song that coincides with Dr. Martin Luther King Day weekend, we remember that when we sing together, our voices are stronger.

We already sang the song at the Sea of Reeds, an ancient song of redemption sung by our ancestors, which was introduced as follows:

Thus sang Moses and the Israelites this song to God…

Moses and his sister Miriam lead the Israelites in singing together, and a midrash says not only that all the men, women, and children were dancing and singing, but even the unborn babies – the fetuses in the wombs of some of the women – sang along as well.

Every single voice joined together for that song. And we continue to sing it today, every morning, as a symbol of our ongoing desire for redemption, as a spur to work harder to build the society that Dr. King envisioned, the one in which we truly understand that “injustice anywhere is a threat to justice everywhere,” and that we become “a society at peace with itself, a society that can live with its conscience.” A nation where justice will run down like water, and righteousness like a mighty stream.

We need to raise our voices together with those of our neighbors, express our love together through song, and bring a little more redemption to this very broken world.