We, the Jews, are good at memory. It’s an essential part of our tradition. What are the ways that we remember people who have passed from this world?

We are thorough at remembering. I think that might have something to do with our history. For much of the last two millennia, the Jews have moved around a lot, and every time we had to pick up and move to a new locale, we had to leave the cemetery behind. (Yes, the book of Shemot / Exodus records how the Israelites took Yosef’s bones with them as they fled Egypt, but that was an unusual circumstance.) It could be that we developed these regular rituals for remembrance.

When I look through our list of yahrzeit names, I often see that those who are observing yahrzeits are far away – who have since moved to Florida or Texas or New York – but their mother or sister or cousin is buried here in Pittsburgh. My grandparents are all buried in the Boston area; I don’t know if I will ever get to their graves again to visit. But I of course carry my memories of them, and I have shared some of those memories with my children. My grandmother, who, when she left her shtetl at the age of 8 in 1921, left her grandparents behind in the earth of Volhynia, Ukraine, could never have even thought about going back to visit them after she arrived in Boston. (For years, my mother and I have been thinking about traveling to the Ukraine to see if we can find them. BTW, I am captivated by the fact that I can see my grandmother’s little town on Google Maps. It’s nothing more than an agrarian crossroads, and the likelihood that the Ukrainians have maintained the Jewish cemetery there seems pretty slim.)

As the Jews were uprooted throughout history and went from Israel to Iraq, to Rome, to Spain, to France, to Germany, to Iran, to Yemen, to Morocco, to India and China and Jamaica and Chile and the Lower East Side and all the other places they went, they did not have the luxury of going back to visit.

So we developed virtual visitation. We carry the names, the faces, the memories of our departed loved ones wherever we go. We carry with us at all times those who have left us behind, and we take those memories down from our mental shelves from time to time. One of the great things about how we Jews mourn is that we force ourselves to remember. We are never entirely healed by a loss, but all that active remembering brings us comfort.

A couple of weeks ago on Yom Kippur, as we dedicated the new memorial plaques to be placed on the walls of Beth Shalom, a name caught my eye: Melaku Allen. Usually, the names that I see enshrined on plaques are drawn from the traditional Eastern European canon of names: Bernstein, Cohen, Levine, Shapiro, and so forth. Lots of Irvings and Idas and Morrises and Minnies. Not too many Melakus.

I actually wasn’t sure even how to pronounce the name.** The plaque was being dedicated by our member Dan Schwarcz. So I asked him about it at kiddush on the Shabbat between Yom Kippur and Sukkot. This is the story he told me.

Melaku Allen was the son of an Ethiopian Jewish father and a Christian, African-American mother, and he grew up in New Jersey. His father returned to Ethiopia when he was young, but Melaku, captivated by the traditions of his absent father, was drawn to Judaism, and underwent no less than three conversions: first by a Reform rabbi, then a Conservative rabbi, and then an Orthodox rabbi. He met Dan when they became roommates; Dan was in graduate school, and Melaku worked for NJ Transit. That was in the mid-1980s, and Melaku was not young then – he had already served his country in Vietnam, where, among his tasks was the spraying of the toxic defoliant Agent Orange. Melaku told Dan that he had been regularly covered with the stuff.

Dan and Melaku became very good friends, although they came from very different cultural backgrounds. Melaku occasionally referred to the two of them, jokingly, as the Schwarcz brothers. And they used to daven together at a little shul called the New Freedom Synagogue, so named because it was sponsored by an organization that was helping to resettle Jews from the Soviet Union, who were arriving in greater numbers in the 1980s.

But eventually, the Agent Orange exposure caught up with Melaku, and in 1987 he died of cancer. His funeral, Dan said, was unusually awkward, because his mother’s family was Christian, but it was a Jewish service. The synagogue members wanted to physically bury him, according to Jewish practice, but Melaku’s mother’s family was shocked by the practice. The officiating rabbi, who must have been a skilled communicator, explained gently that this was Melaku’s wish, to be buried according to Jewish tradition, and that the Jews consider it one of the highest forms of hesed, loving-kindness, to bury our deceased loved ones as a community, each of the assembled mourners helping out. So the Jews began the process of burying Melaku, and the assembled group seemed very tense and awkward, until Melaku’s mother stepped forward, picked up the shovel, and put some earth into his grave. There was a feeling of relief, and the Jews and the Christians all buried Melaku together, shoveling the earth together in fellowship while they remembered this man who died too young.

Dan did not have to take upon himself the obligation for remembering Melaku. He was not a relative.

But Melaku did not have anybody else to recall him in the Jewish way. So Dan took the virtual visitation upon himself. And then he went a step further to recall him with a plaque, which will now sit on the wall in Beth Shalom as long as this building stands.

One of the wonderful things about Judaism is that remembrance is all-encompassing. We remember and grieve for all those whom we have lost. The sibling from whom one was estranged. The abusive parent. The stillborn child*. Those that perished in the Shoah, and of course for many of them there is nobody to mourn. Those that gave their lives to defend their country, and in particular those who gave their lives for the state of Israel.

That is one reason that I urge people not to follow the old Ashkenazi custom of not staying in the room for Yizkor. We need more remembrance. We can always offer words of Yizkor. The need for recalling those for whom there is nobody saying qaddish is far greater than old-world superstitions.

And even for those for whom there is no plaque, and no living relative, we continue to recall them. Just as Moshe fulfilled the promise that the Israelites made to Yosef, hundreds of years prior, to take his remains up from Egypt with him, we fulfill that obligation to all who came before us, carrying the spiritual remains, if you will, of all Jews who came before.

There is a Jewish cemetery in Berlin, which I once visited on a tour of Jewish sites there, where Moses Mendelssohn is buried. Mendelssohn, of course, is the father of the Haskalah, the Jewish Enlightenment that began in the 18th century, as Jews stepped out of the shtetl and into Western society. Mendelssohn was, arguably, the first modern Jew: he lived an observant life and wrote extensively on Jewish topics, but also entered the salon culture of Berlin, wherein he schmoozed and sparred with non-Jewish German philosophers of the time, most notably Gotthold Ephraim Lessing. He is one of the three great Moseses invoked in the piece of Jewish intellectual folk wisdom: From Moses [the biblical one] to Moses [Mendelssohn], there is none like Moses [Maimonides].

The Nazis destroyed the cemetery, and as you walk through it you see fragments of the matzevot (gravestones) in the ground. But when I visited in 2001, there was one matzevah standing: that of Mendelssohn. It’s a recreation, of course – it’s not the original. But it’s a stark, powerful statement of memory. 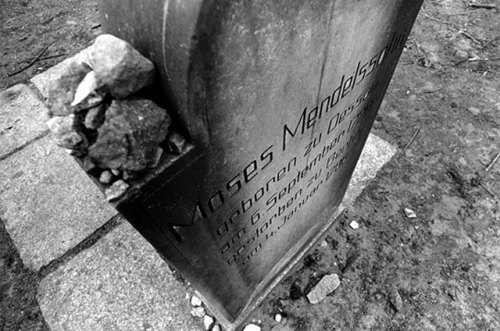 Does Mendelssohn need a marker? No. We recall him every time a contemporary Jew acts like a citizen of the world: dressing like an American, or studying at a French university, or voting in a democratic election in the State of Israel, or recording a hit rap album (with a nod to Mac Miller, z”l). Our virtual visitation of Mendelssohn consists of living proudly as Jews who are welcomed into the broader society.

We continue to mark Moses Mendelssohn’s passing, and Melaku Allen’s, and all those whom we recall today, as we make our way through life, virtually and physically. But the essence of remembrance is not what’s on the wall, or in the Book of Remembrance that you all hold, or even in reciting Qaddish or lighting a candle. It is in what is in our hearts as we remember them, the things that they gave us, the moments we shared, the times we hear their voices coming out of our own mouths. Those are the items that sustain and honor our beloved parents, sisters and brothers, wives and husbands and partners, our sons and daughters and friends and all those whom we recall, as we continue through life.

* Yes, some have the custom not to mourn children who do not live past 30 days. But first of all, that is because in the pre-modern world, many, many children died this way. Also, it’s just a custom. If it helps you heal to mourn for a miscarriage, a stillbirth, a baby who died soon after birth, then you have every right to do so.

** Dan tells me that while his mother accented the first syllable, “MEL-a-ku,” his Jewish friends accented the second and turned the k into a khaf: “mel-A-khu.” I cannot confirm this, but my suspicion is that it is an Amharic (Ethiopian) cognate of the Hebrew melekh, meaning “king.” Amharic and Hebrew are both in the Hamito-Semitic family of languages.