The bloodbath in Orlando has made this Shabbat particularly relevant.

I said something briefly about it on both days of Shavuot. After services on Monday morning, the second day, one person who had been in attendance, a man who has a long family association with this congregation, came forward to speak with me. He told me that as an American, a Jew, and a gay man, he was tremendously grateful for my having said a brief word during services, acknowledging the pain of loss, the grieving that we should all feel after such horrific news, about the pain it has caused to the LGBT community, and particularly the Latino component thereof.

In a different conversation that I had a few months back, a member of this congregation told me that her son, now a young adult, is gay, and that he never comes to Beth Shalom anymore when he is home. Why? Because, when he was a teenager, he heard other members of this congregation make disparaging remarks about gay people, and he no longer felt welcome here.

Ladies and gentlemen, hevreh (as they say in Israel), we are riding a wave of great change in our society not only with respect to gender issues, but also with many types of “otherness.” Millennials, that mystical category of young people, do not see lines that separate people the way that their parents and grandparents do. They think in universal terms.

Here is something that might be easy to say, but not quite as easy to make happen:

All are welcome here. Not only that, but all who want to be a part of our congregation must be not merely welcomed, but also included into the fabric of who we are, encouraged to connect with the Beth Shalom community. Not to do so, especially in the wake of last weekend’s shooting, is simply wrong.

That’s not so easy. Traditionally speaking, Judaism, and particularly synagogues, are accustomed to drawing lines. Boundaries that divide us. Who’s in, who’s out, who is pious, who’s a sinner, who’s a big donor, who has a dues arrangement, who’s a member, who’s not, who is Jewish, who isn’t, etc. And it’s not just internal – one of the classic stories about synagogues is that even a Jew stranded alone on a desert island needs two: one he davens in, and the other one he wouldn’t go into if you paid him.

Synagogues like to think of themselves as places where halakhic distinctions are rigorously maintained. That is, the lines within our tradition, how we divide people, apply in ritual matters. Even in egalitarian congregations like this one, there are still lines.

And let’s be honest here: there are times when we need some lines. What allows Judaism to be effective in our lives is the boundaries it creates: boundaries between what is holy and what is not, between making the right interpersonal choice and the wrong one, between taking or not taking an opportunity for holiness. These are essential to allowing our ancient tradition to infuse our lives and provide guidance and personal benefit.

But we should work to eliminate lines between us as people. Anybody who wants to come pray with us, celebrate with us, grieve with us, learn with us, they are welcome! I don’t ask any questions about what you do when you leave the building, on Shabbat or any other day. All who come are included.

The key to the Jewish future is being open.

And not merely open; we have to almost drag people in off of the street. Nothing brings people in like personal invitation. And nothing shoos them away more quickly than being told that they are somehow deficient. And we all have the potential to be ambassadors for Judaism, and for Beth Shalom.

The Talmud (Yoma 35b) tells us a revealing story about Hillel the Elder. He would come to the beit midrash / house of study every day, spending half of his daily earnings on the entrance fee. One Friday in winter, he could not find work, and had no money in his pocket, so the guard at the entrance to beit midrash would not let him in. He still wanted to learn, so Hillel climbed up to the roof and sat on the skylight to listen to what was being taught.

As Shabbat fell, it began to snow. On Shabbat morning at dawn, those gathered in the beit midrash wondered what was blocking the light from above. They go up to the roof and find Hillel buried in the snow. They bring him inside, bathe him, anoint him, and warm him up by the fire (all things that would be traditionally forbidden on Shabbat). One teacher makes the observation, “This man deserves to have the Shabbat laws violated on his behalf.”

The message is not necessarily about money, but rather all the obstacles that might prevent somebody from accessing our tradition. We, those on the inside, have to work hard to make Judaism and the synagogue experience available to all who want to learn, pray, celebrate, and grieve. Sometimes, we have to move beyond our comfort zone, and even have to violate some of our core principles to do so.

Many of you know that I, as a Conservative rabbi, may not officiate at weddings if either the bride or groom is not Jewish. That is a policy that will not likely change soon.

But here’s the funny part: I will do everything in my (limited) range to welcome that couple into our congregation. I will be happy to meet with them before the wedding, and I will of course welcome them as members if they choose to join.

A couple of decades ago, when mixed marriages were becoming much more common, the Committee on Jewish Law and Standards (CJLS) of the Rabbinical Assembly laid down the law, or so they thought. They forbid acknowledging such a wedding, of course. They forbid an aufruf or congratulating the Jewish family or accepting donations for a non-Jewish child born to such a family. They forbid allowing an intermarried Jewish person to be called to the Torah.

Did these measures lower the rate of intermarriage? No. Do you think that any Jewish person considered, before getting into a relationship with a non-Jew, that his/her rabbi would not officiate at or attend their wedding, if they were to get married? Probably not.

All they did was to annoy the parties involved, and send them to Reform congregations, where they of course were welcomed, or out of the Jewish world entirely.

(The CJLS has come a long way; it has been nearly a decade since they voted to ordain openly-gay rabbis and allow rabbis to perform same-sex weddings; and in April of this year, they passed a teshuvah “nullifying any provisions in Jewish civil law that are discriminatory against non-Jews.” So that is something.)

But if we really believe in what we do, in a Judaism that is traditional and still progressive, shouldn’t we want all of those families to be welcome here? 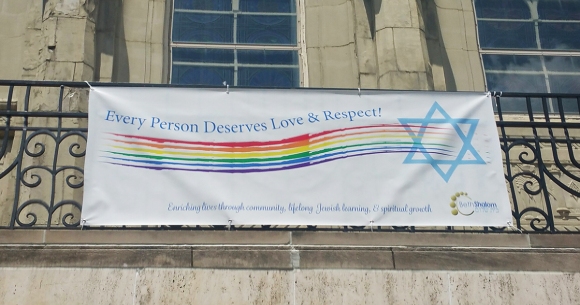 You should be pleased to know that among those who are completing my conversion course this summer, three of them are already married to Jews, and already have children. We’re going to get 7 new Jews out of just those three families.

The greater point here is that if we are open and inclusive, we will gain new members, new families. We will even make more Jews! We will be stronger as a community. We will teach and learn more, engage and raise our holiness quotient to new heights. We will thrive in our interconnectedness.

In the wake of a senseless tragedy that took the lives of so many in the name of hatred and intolerance, Beth Shalom and other faith communities should be standing up for compassion, for love, for tearing down walls, for eliminating not just the mehitzah of the traditional synagogue that separates women from men, but all the lines. We have to include those who are peering in from the skylight. We have to acknowledge the divinity in each of us.

The early 20th-century English novelist E. M. Forster, in his novel Howard’s End, pointed to the power of connection in a well-worn passage:

“Only connect!” he said. “Only connect the prose and the passion, and both will be exalted, and human love will be seen at its height. Live in fragments no longer. Only connect, and the beast and the monk, robbed of the isolation that is life to either, will die.” 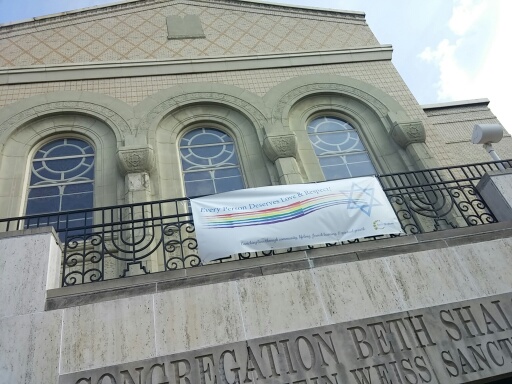 The goal is connection; the path is openness. We have to be committed to both.

May the families of those who lost loved ones be comforted; we grieve with those who suffer from loss. May our openness and interconnectedness prevent such tragedy from striking ever again. Shabbat shalom.