I read with great interest a few days ago about the efforts of some tech companies to prevent the use (or abuse) of social media to foment political division. In case you have no idea what I am talking about, here’s a brief summary:

Foreign powers like Russia and Iran have created fake accounts on Facebook, Twitter, and other platforms for the purposes of creating division in our society. The way it works is something like this: they create what look like activist groups by posting items of interest around certain hot-button causes – racism, for example, or gun ownership, or abortion. They attract followers, and then amp up the message by posting items that promote violence and hatred against those who disagree with them. Then they make connections with other, actual groups who have similar views, and convince them to host protest activities. One protest in Houston in May of 2016 called “Stop the Islamization of Texas” was not only organized by one of these fake groups, called Heart of Texas, which had 250,000 likes on Facebook, but also that protest was met by a counter-protest that was also organized by Russian trolls. Interestingly, nobody from Heart of Texas showed up, because it has no actual members, only Facebook likes. 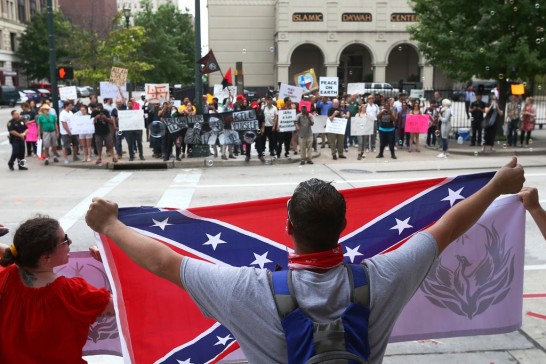 The goal here is to disrupt us, to make us all angry, to make it seem like we are not all on the same team.

We are apparently all being played this way. Some of the platforms (Facebook and Twitter) are now working harder at taking these things down, but they are not necessarily easy to find. Also a few days ago, Microsoft announced that they thwarted Russian attempts to hack into the US Senate and two right-leaning think tanks.

In a few weeks, over Rosh Hashanah and Yom Kippur, I will be speaking about love: love of self, love of family, love of community, love of the world. These are all essential things that we need more of, and we will be discussing sources in our tradition that point to to the imperative to love. But even before we get to that point, we have to understand as a society that we are all in this together. Perhaps we have lost that sense.

In thinking about this, it occurred to me that a curious, obsolete law in today’s parashah (Torah reading), Ki Tetse (BTW, the Wikipedia entry on this parashah offers seven ways of spelling its name!), suggests something relevant to us today. It’s about the situation in which a man has two wives, and he loves one and hates the other. (In biblical times, perhaps this was a common occurrence; divorce is permitted in the Torah, but generally due to some kind of perceived flaw — this also appears later in Ki Tetse). The man’s firstborn son, who inherits a double portion of the man’s estate, was born to the unloved wife. The man is not permitted to favor the son of the wife he loves; he must follow the laws of inheritance despite his personal preference.

What we might find in this is the following: our personal feelings about others around us do not matter. Their politics, the things that others do that we do not like, these things are irrelevant. We still have to cooperate with them, interact with them, and maintain societal norms with them. With respect to the law, we cannot favor those whom we like.

About two years ago, the New York Times published a captivating op-ed by the Dalai Lama and Arthur Brooks of the American Enterprise Institute about contemporary anger, discontent, and anxiety in the wealthiest nations of the world. Their suggestion was that not enough people feel useful – that is, that the nature of our society is that too many of us feel not needed, and that for humans and society to thrive, we have to feel needed. They said the following:

Virtually all the world’s major religions teach that diligent work in the service of others is our highest nature and thus lies at the center of a happy life. Scientific surveys and studies confirm shared tenets of our faiths. Americans who prioritize doing good for others are almost twice as likely to say they are very happy about their lives. In Germany, people who seek to serve society are five times likelier to say they are very happy than those who do not view service as important. Selflessness and joy are intertwined. The more we are one with the rest of humanity, the better we feel.

One of the primary goals of halakhah, of Jewish law, is to set up an interdependent society in which people take responsibility for each other. And an essential part of that is to understand that everybody, and I mean everybody, is a part of that. Not just your friends. Not just your family. But all of us. That’s why the Torah exhorts us multiple times to take care of the orphan, the widow, the stranger among us. That is why halakhah is so all-encompassing, framing every aspect of our lives in holiness.

The Dalai Lama and Mr. Brooks go on to suggest a plan for how to improve everybody’s sense of being needed:

What can we do to help? The first answer is not systematic. It is personal. Everyone has something valuable to share. We should start each day by consciously asking ourselves, “What can I do today to appreciate the gifts that others offer me?” We need to make sure that global brotherhood and oneness with others are not just abstract ideas that we profess, but personal commitments that we mindfully put into practice.

Does anybody hear anything in that passage that exists in Jewish tradition? Neither Arthur Brooks nor the Dalai Lama are Jewish. And yet, how do Jews start each day? By expressing gratitude for everything: Modeh ani lefanekha. Grateful am I to You, God, for putting my soul into my body this morning. And then we continue with a whole litany of thanks known as Birkhot HaShahar, the morning blessings, which we recited here just a short time ago.

And I can point to a myriad of ways in which our tradition reinforces the idea of oneness. What does Hanukkah teach? To cast light in this world. What does Pesah teach? To bring people out of oppression. What does Rosh Hashanah teach? To remind us of our equality and humility before God, across all of Creation.

What does daily prayer teach? That a minyan, a quorum of ten Jews, is needed to get going. That we need you to make it happen. That we are all in this together. In a greater sense, we all need each other if we are going to tackle the great challenges facing our society right now. We need everybody to be on board in trying to do something that is really hard: reaching out to others.

You count. You are needed.

And here is what we all need you to do:

A final note: one of the special things about houses of worship, like synagogues, is that they bring together a whole range of people: people with diverse opinions, people from different backgrounds and economic strata. We need you to be here, but even more so, our society needs gathering places like this that build social capital, where we can come together for holy purposes and, even when we disagree, understand that we are part of something greater.

The future of our society depends on you: your willingness not only to understand that you are an essential part of the universal whole, but also that your neighbor is not your enemy. Ve-ahavta lereiakha kamokha (Vayiqra / Leviticus 19:18). Love your neighbor as yourself.